Can gluten free diet help Graves’ disease/Hyperthyroidism? Can it cure it?

A million dollar question. That’s exactly the question that I’ve been asked over and over again in the past 10 years. The answer though is – it depends. But as Hippocrates said: “All diseases begin in the gut.” Was the man right so many centuries ago? I did some research and here are my thoughts on the subject:

If an individual has a healthy intestines and stomach, products like wheat, rye and barley are very unlikely to cause any problem. However, if there is an inflammation of the intestines or because of the over-processed and canned foods we constantly eat,  there are no healthy bacteria to help the digestive process.

Such a person may develop the so called leaky gut syndrome. This leaky gut syndrome will occur if the lining of the intestines become impaired or inflamed and this will allow toxins and gluten, as well as other substances that are not supposed to be there to enter the blood stream, thus, alarming the immune system that there are invaders in the blood. Some researcher also believe that the leaky gut syndrome is caused mainly by antibiotics which can destroy the healthy bacteria in the large intestine, create conditions for yeast overgrowth and cause, finally, Celiac disease. While I do believe that antibiotics play certain role, that’s not all. The average person today consumes daily tons of medications ranging from painkillers to antidepressants and anxiety medications. If you think that these medications are not affecting the stomach flora, think again. Plus, you can add all the foods (all, with an exception of the organic), that contain all kinds of preservatives, stabilizers and chemicals that nobody knows what are there for and what they do to us. When the yeast (so called candida albikans) in the large intestines overgrows due to the above mentioned reasons it causes inflammation of the small intestine, which, in other perfect conditions will prevent the toxin and chemicals to get into the blood stream.

I would think that this is how some of the autoimmune diseases are born, or at least that could be one of the reasons. Celiac disease, accordingly, is connected with this leaky gut syndrome and pertains to allergic reaction to gluten. It usually affects the small intestine and prevents the body to properly absorb food. Some of symptoms of celiac disease are diarrhea, abdominal pain, gas, irregular menstrual periods, weight loss, muscle cramps, skin problems of different kinds, mostly rashes, hair loss. These symptoms, as you may have noticed already, are very similar to some of the Graves’ disease and hyperthyroidism symptoms, and in fact some of hypothyroidism symptoms as well. 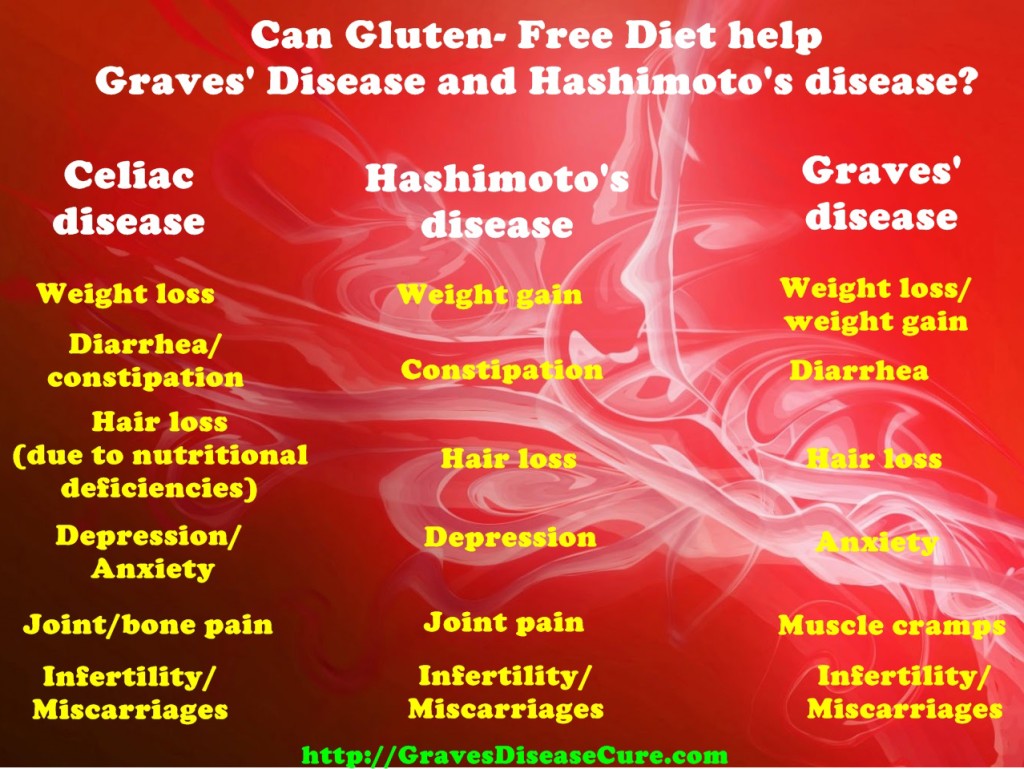 The evidence on the connection between Celiac disease and thyroid disorders is just piling up in the last few years, especially with the drastically increased number of children, diagnosed with Graves’ Disease. Why? Because children are more prone to eat unhealthy snacks, and school food, where parents have no control over it. (My daughter’s school served to children free milk with a lot of sugar in it, while a bottle of water cost $1/bottle. I am wondering why water is more expensive than milk in this school?)

Anyhow, a study in the Journal of Pediatrics found that 11 of 15 children who have been diagnosed with Celiac disease and thyroid disorder at the same time after following up a gluten- free diet for about 12+ months, saw drastic improvement in their thyroid levels. Another study (below) found that people with Celiac disease are way more likely to have elevated thyroid antibodies, compared to those who did not have problems with their guts (37.5% vs. 4.4%). The study also demonstrated a positive correlation between anti-tTG and thyroid antibody titers in patients who had Celiac disease.  And as we all know, one of the ways to reduce anti-tTG levels in this case is to go gluten-free.

So, will gluten- free diet help Graves’ disease and improve your thyroid levels? Very likely the answers is yes, especially if you were not so much into the “healthy eating” thing. And I would suggest everyone who is diagnosed with hyperthyroidism to get tested for Celiac disease, just in case.

Celiac disease is also believed to be a great companion of other autoimmune disorders like Lupus, Graves’ Disease, Diabetes I, and Rheumatoid Arthritis etc.   If you don’t want to get tested to whatever reason (the test is actually a biopsy of the small intestines), try to be on a gluten-free diet for at least a month or 6 weeks and see if your symptoms improve or not. You may not have Celiac disease, but you can be just sensitive to gluten products.

Don’t also forget to get checked for Yersinia enterocolitica (bacteria) and Helicobacter pylori infection. Both are found in the gut and scientifically proven related to autoimmune thyroid diseases like Graves’ disease and Hashimoto’s. I can’t stress that fact more, especially when it comes to children (and I’ve written a whole book on this subject: “Children with Graves’ Disease and Hyperthyroidism”- a book for their parents).

Most doctors believe that celiac disease is incurable. I don’t know that, but if you try to eat gluten- free products (specifically avoid products with wheat, barley and rye) for some time and also use probiotics to support the digestive process you may eventually see great improvement, including in your thyroid antibodies. Probiotics are also found in the yogurt that contains “live cultures” like Streptococcus Thermophilus,  Lactobacillus Bulgaricus, Lactobacillus Lactis, Lactobacillus Casel, Lactobacillus Acidophilus and Bifidobacterlum spp. The yogurt containing these cultures will say on the label “live and active probiotic cultures”.

I personally take probiotics daily as a supplement because I consider most of the foods sold in stores as “dead” food. Even though I prefer to cook from scratch, I can’t completely avoid the artificial products, stabilizers, coloring and flavors that are used in food processing today.

Another product that can greatly benefit your stomach and intestines is the Aloe Vera gel, which I already mentioned for other purposes. As you can see it doesn’t have only one benefit, but many for that matter! So, finally, get your Aloe Vera! (link is provided for your convenience here).

I’ve wrote and listed most of foods that are good for you, if you are diagnosed with Graves’ disease and hyperthyroidism, including some recipes and recommendations about what foods to avoid in my recently updated book “Ultimate Diet secrets for Graves’ Disease and Hyperthyroidism: (it’s also available in paper)