I was diagnosed with Graves disease in May of 2008.  My primary doctor was just doing a routine blood analysis and discovered that I had no THS (Thyroid Stimulating Hormone) being released by the Hypothalamus for the Pituitary gland to tell the Thyroid to turn Iodine into Thyroid hormones.  He did a follow up test of my T3 and T4 (the two Thyroid hormones) and found many times the amount that it should have been.

As far as I know I had no symptoms (except maybe a bit of heart palpitation that I wanted to discuss with my doctor).  My eyes didn’t bug out too much, and I wasn’t losing any weight.  But my primary doctor sent me to a specialist who felt my thyroid gland and confirmed the diagnosis.  He discussed all the alternatives (medication, removal, radiation, etc.) and I was adamantly against all of them.  I did, however, give in to taking Methimazole.  But I also purchased your book (Life Manual for Graves’ Disease) and found that Stress was a major influencer in the disease. 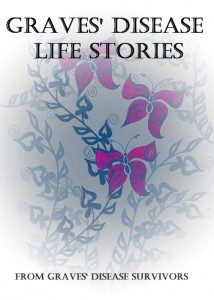 I discussed this fact with my doctor, who dismissed it as poppycock.  He said stress had absolutely no influence over the disease. He also said it didn’t matter what I ate or whether or not I exercised.  I decided he was full of it.

The fact was, March and April had been just about the most stressful months of my life.  Both of my parents (who had divorced many years prior) had ended up in the hospital. Both needed to be convinced they should move into assisted living. Dealing with them was extremely difficult, and the time I had been investing had taken away from my normal wellness routine of 90 minutes of daily exercise and healthy eating.

By June, however, much of the stress was gone as my Mother was safely ensconced in assisted living and my Father had stopped drinking and had improved enough to live independently again. I returned to my routine, including Taijiquan which calmed me and controlled my stress levels.  I did make one change the doctor requested: I stopped taking a daily vitamin that had iodine in it (replacing it with One A Day, the only iodine-free vitamin I could find), and started using Kosher salt without iodine.  The next call from the specialist was a frantic call to stop taking the Methimazole as my Thyroid hormones had fallen dangerously low. The doctor pronounced me “in remission” by October, when my levels returned to normal after I stopped taking the Methimazole.  He told me that I in 95% of the cases, Graves disease never returns.

That’s my story. Feel free to use it.